A report entitled: The Big Data Dilemma, launched by the Science and Technology Committee, contains many contributions from two of our key partners, the Open University (OU) and the Open Data Institute (ODI). The value of big data has brought with it many benefits, including increasing the GDP by 2.3%, but also many concerns regarding its usage, particularly within government and large businesses. 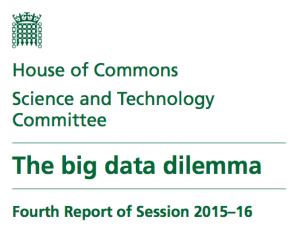 story across the UK, and across wider Europe, with 58,000 jobs being created over a five-year period. However, big data raises concerns regarding privacy, and how personal data is being utilised and re-used. Even though personal data represents a small minority of the large-scale of data that is collected, distributed and disseminated on a daily basis, the accessibility of personal data now presents a potential distrust. This is something that the Government and industry are working hard towards curtailing and resolving in order to realise the true value of big data.

The report notes the failure of the care.data initiative, that shared patients’ health data, and how the Government cannot afford to have another failure at this scale. As a result it was advised the Government should take lessons from this failure and control the data that is disseminated through various channels, and also learn from the successful similar scheme in Scotland.

The report details some important issues in big data, detailing the major potential value of big data, but also the potential costly failures that may result in poor data management.

The full report can be viewed here: http://www.publications.parliament.uk/pa/cm201516/cmselect/cmsctech/468/468.pdf.